#sciencefiction #adventure - Go East, Young Man, the sequel to Dreamfarer, takes place 150 years in the future after World War III. Sam Adams travels with his friends from San Francisco all the way to Denver, having dangerous encounters on the way. Sam, who played a vital role in shutting down the San Francisco Dream Services Center and waking up half a million dreamers, hopes to meet a mysterious contact in Denver who will recruit him for his next mission.

The goal of the nationwide Resistance is to cripple the Dream factories completely and wake up all Americans, saving them from their psychic dependence on machine-induced dreams, which are far more exciting and fulfilling than the often dull existence of ordinary life.
They journey across an America that has regressed to being a lawless frontier. Wherever they stop, thieves and murderers attack them. Will they ever survive to reach their destination? Can Sam even trust his friends? Does he have any chance at all of succeeding in his mission? Amazon: https://amzn.to/3Xbehvq ~ 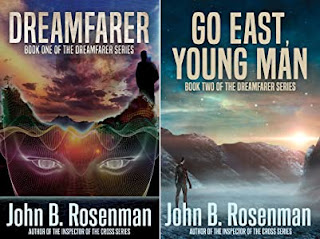 Now, Sam thought, he must continue on to help those in Denver to disrupt dream services in that city or anywhere else, must save other sleepers from the deadly addiction of dreams which denied life itself. He had committed himself to a worldwide revolution, a movement that those in power would do anything to crush.

Something moved in the distance. He rubbed his eyes. The light was still dim and he had probably imagined it. No, there it was again, far back down the road he had come. It looked like…a man. And he was walking directly toward him.

Sam staggered up, instantly alert. He had no gun or other weapon, and was in no condition to defend himself. Glancing about, he saw only thin stands of trees on both sides of the road. They offered few places to hide.

He squinted, trying to see better, to make out if the man was big or small. Whoever he was, he was probably harmless. Yes, the odds favored it. But the only times he had ever been a good gambler were in the Center’s dreams, when he had been a Western gunslinger or a secret agent. With his luck, the person had deliberately stalked him all the way from the Center to kill him for what he had done. It could be vengeance, plain and simple.

But vengeance made no sense and was completely implausible. How could anyone have tracked him all this way in the dark? And with all the panic and confusion, how could they have picked up his trail in the first place? Yet he had no doubt it was so and cursed himself for not moving into the trees immediately. He started to do so but at that moment the ripening sunlight touched the figure more clearly, revealing something familiar.

No, it couldn’t be. But Sam stood watching as the man grew closer and closer and finally halted a few steps away. Sam stared in amazement.

“You!” he barely managed to say. 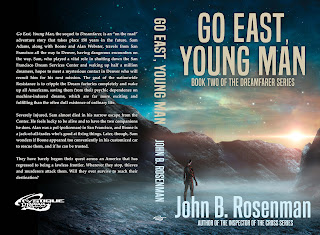