DO YOU KNOW WHAT MORAL REALITY IS?

Just this morning, one of my friends said that the only moral way to have sex was within marriage.

Another friend said that it is not necessary to be married to indulge.  Or, if your spouse is sick or indisposed, it may be advisable to engage in sex elsewhere until s/he is able again.

They could not agree.  What's more, people will never be able to agree on these and many other issues.  Some people may think such issues are clear-cut, and they are all a simple matter of right or wrong, but are they?  I believe that moral reality or whatever you care to call it is often hard to define.  It often depends on who's doing the looking, and what their belief system is. 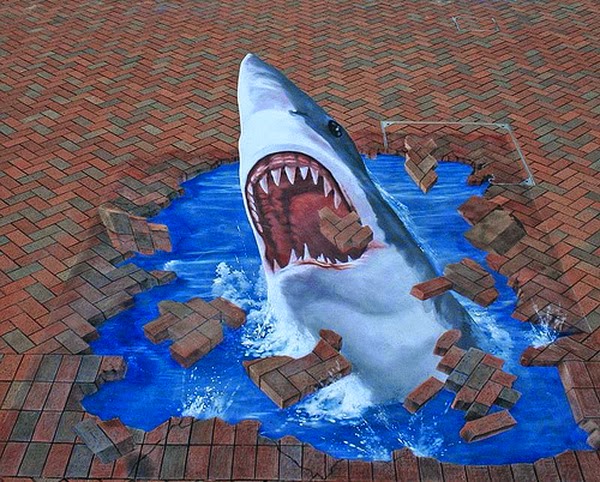 I for one believe that same-sex marriage is fine.  Equal rights for everybody. Others, who are more traditional, believe that a marriage must require one man, one woman.  The problem is, everything eventually changes, and when you get both sides together, they repeat the same old arguments without really listening to each other or convincing anybody.  They can't agree on what moral reality is or should be. 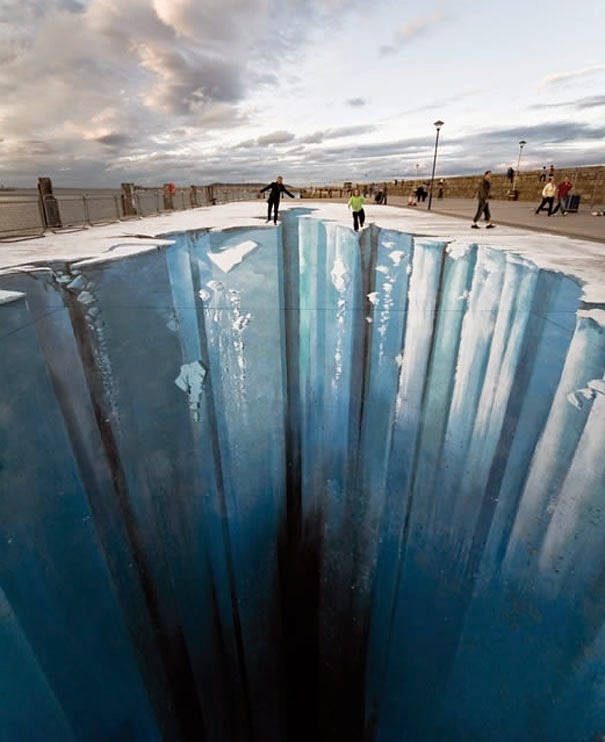 More and more, I find that our inability to agree on our values or moral reality is reflected in other things as well.  For example, consider these two vivid works by Edgar Muller.  Is there really a fierce shark rearing out of the brick pavement and a deep chasm that these people are in danger of falling into?  Or are these just brilliantly clever three dimensional street paintings designed to deceive the eye?  Is it possible that paintings like these are partly inspired by our morally and ethically ambiguous and divisive times?  This is a period I believe of unprecedented change in many areas, especially thought.  We are reexamining our sexual, religious, and political values, and discussing and debating them on a non-stop basis.  We don't automatically salute old beliefs so much anymore just because they are old beliefs.  We are coming to realize there may be at least two different ways of looking at them, as there are with these paintings.

It is both a challenging and liberating time to be alive.

THE MERRY-GO-ROUND MAN IS NOW AN AUDIOBOOK

By: John B. Rosenman
Published by: Crossroad Press
Available for Sale at: audible.com, Amazon, iTunes, Barnes and Noble
Retail Price for audiobook: $19.95
Audiobook: B00NP5UD4A
Retail Price for eBook: $4.99
eBook ASIN: B00KP17YOE
Retail Price for Trade Pbk: $13.95
Trade Pbk ISBN:-10-1937530914
Retail Price for Hardback: $23.47
Hardcover ISBN:-10: 1937530906
Hardcover ISBN:-13: 978-1937530907
Audible Purchase Website:
Publisher Website: http://www.crossroadpress.com/
Author Website: http://www,johnrosenman.com/
Praise for The Merry-Go-Round Man:
KSL:  "I was so engrossed in the story that I was taken by complete surprise when the story concluded--I wasn't ready for it to end. IMHO, The Merry-Go-Round Man would made a terrific movie. "
Leona Pence: "I especially liked this book because I grew up in the same time period as Johnny, Jimmy and Lee. So much of it took me back to my childhood, my old school and that wonderful merry-go-round. My heart went out to Johnny with his remarkable talents and the overbearing father who tried to control him."

Do you believe you can shape your future, determine your destiny?  One spring day in 1954, three sixth grade boys make a bet: the one who can climb first to the top of a small green merry-go round outside their school will be "Champ for life!"  For the rest of his days he'll be "on Easy Street!" So they engage in a "mad scramble . . . clambering over each other with murderous intent," and eventually one of them reaches the summit and stands triumphant, lording it over the others.  He is the merry-go round man.

The Merry-Go-Round Man is a novel about three boys growing up in the so-called innocent days of the Eisenhower fifites.  It's about rites of passage, loss of innocence, sexual initiation, racism, and much more.  Of the three boys, Johnny Roth is central. He possesses two transcendent gifts which are only beginning to emerge as the novel begins.  One of them is the ability to box or fight, something he deeply fears. The other ability is artistic and mystical.  He is a natural expressionistic painter of vast potential.  Unfortunately, Johnny's father, an Orthodox Jew, hates both of these pursuits, and his opposition tears Johnny apart.

Of the two other boys, Lee Esner grows up to be a gifted football player with what looks like a lucrative pro career ahead of him.  He also has a flair for attracting beautiful girls.  Is he the merry-go-round man?  The third boy, Jimmy Wiggins, is black and from the ghetto.  Attending an elite white school with Johnny and Lee, his naive love for a pretty white girl is destroyed by her cruel racism.  Another rite of passage. Symbols such as a burning Buddhist monk make us ask whether anyone is really The Merry-Go-Round Man in life.

Posted by John B. Rosenman at 7:55 AM No comments: