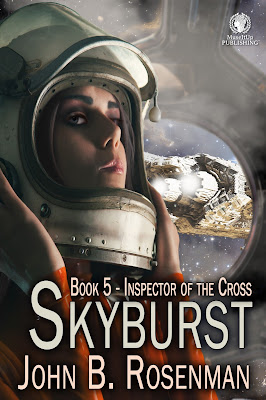 I'm excited to be continuing my Inspector of the Cross science fiction-romantic adventure series. This is the first novel in the series in which I've focused on a girl, a young heroine in the making. Skyburst is a coming-of-age story; yet at the beginning, Sky Masterson is on the verge of death, suffering from cancer and other diseases. How can she possibly survive?

In Defender of the Flame, Turtan arrived on First Station and organized a plan to defeat the aliens and save humanity. Skyburst looks at many of the same events from the standpoint of Sky, Turtan’s young protégé. In just a few years she grows into womanhood and meets momentous challenges which shape her character and test her courage and abilities. As the great mission to attack the enemy approaches, she constantly asks herself one question: Will she be ready to face the alien menace that threatens to destroy mankind?


She’d known this day was coming. As Doc would say, it came with the territory. If she wanted to be an Inspector and do her part in the grand crusade, she could not do it alone. She must have company.

She stood in a Head Banger (the cadets’ word for these rooms) and faced Tan. He stood two and a half meters away, brimming with the Radiants he would soon share with her. She smiled, eager and ready for their arrival. All the cadets she’d talked to had been positive about the experience, some even describing it as a mass party with loving, playful guests. They weren’t her, though. What would it feel like to have such creatures enter her brain and move about inside? If Carrie Flowers was right, it would be wonderful indeed.

And yet she felt a dollop of doubt, a touch of fear. The Radiants could be like the Cen in the Lauren mine, lurking and stealing through the dark tunnels and caves, waiting to pounce. A moment’s carelessness or miscalculation and you were dead.

Nonsense. Tragic as the two dead cadets and Elise’s case were, the cause for such accidents had been identified and the problem corrected. Since then, her fellow cadets had adapted well to this benign invasion. Some had actually flourished. Despite the rooms’ name, only a few had even experienced headaches or nausea. There were dozens of successes, one after the other, with several cadets now hosting over a hundred million Radiants. The program was rolling exponentially on, and Admiral Walker and everyone concerned was optimistic.

Only something still nagged at her. What if her case was different, and it went wrong? She thought of Elise lying broken in her hospital bed and wondered if she’d soon have a roommate.

No, silly. You’ll have your own room!

She smiled, and Tan took it for a signal. “Are you ready, Sky-
Bird?”

Someone sneezed then sneezed again. Kit/Yani and Carrie Flowers were present, along with Admiral Walker and some of his officers. Sky realized her relationship to Tan gave her a special status. However, the nearby presence of Dr. Wu and another physician indicated the potential risk. Above, the ravaged wasteland of Secuna watched as always, reminding her that invaders were seldom friendly.

She licked her lips, her mouth dry. “I’m ready,” she said.

He raised a finger and pointed at his eyes. “We’ll start with five Radiants from each eye. If all goes well, and I assume it will, I will increase the number.”

“Understood,” she said, familiar with the procedure.

“If at any time you feel distress or discomfort,” he said, “let us know at once, and the Radiants will withdraw. Shout if you have to.”

She waited. Seconds passed, stretching like one of her code instructor’s lectures.

And then the Radiants came toward her in shimmering silver trails. She started to stiffen and caught herself. Relax!

Relax? I’ve never even had sex before, and now I’m going to let God knows how many little beasts enter and rape my brain.

She knew such fears were ridiculous and it was common for cadets to have them. But she should be better than they since she’d shared more with Tan and seen firsthand how easily he hosted billions of Radiants. Hell, he’d even named the damned things and was confident there’d be no problems. If he himself believed the Radiants were safe, then there was nothing to worry about!

Only now she saw them coming directly at her, not some other cadet. This time, she wouldn’t be merely watching but would be on the receiving end.

As the Radiants entered her head, she made herself relax. Breathe out, breathe in.

At first, she felt nothing. Then she heard an inner chorus without sound. “Hello, Sky-Bird!”

She raised her hand, cupping a smile. “Hello!”

She was mad at herself for forgetting. “Hi, my new friends,” she thought. “I’m glad you could come to my party.”

“Thanks for inviting us, Sky-Bird!” they replied in joy.

Sky-Bird. Suddenly everything was all right. She was not alone but realized she felt more complete than ever before. These Radiants were drenched in Tan’s flavor, in his love. It was almost like having him inside her.

Sky swung to Carrie and winked. “You were right, Carrie,” she thought. “You don’t become less, you become more.”

“Shall we continue?” Tan prompted.

The Books in The Inspector of the Cross series: