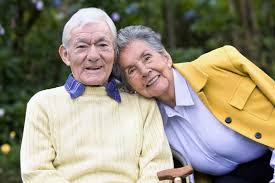 (Reprinted from The Write Room Blog. Valentine's Day!- A Collection of Members' Poems and Stories on Love and Romance, which can take many forms.  My story's about people we often forget who are nearing the end of their lives.  http://www.thewriteroomblog.com/?m=201502)

Andrew Delane hadn’t heard her voice in fifty-nine years, but he recognized it in a heartbeat.  He paused with his hand on the door of the assisted living facilty before leaving and then turned, blinking with surprise.

Surely he was mistaken.  It was his imagination.

Then he heard the voice again and shuddered with wonder.  Hale, hearty, and at seventy-seven years of age self-sufficient as the broken friend he’d just visited wasn’t, he made his way across the day room until he discovered the voice’s source.

Six decades had ravaged and wilted the once fresh, flirtatious girl who sat alone at a table, her face a mass of wrinkles.  While others might not have recognized her, Andrew had no trouble at all.  To him, she was as lovely as ever.

She blinked and looked up.  “Have we met?”

Her knobby fingers turned something over—a Valentine’s Day card.  “To Grandmother with Love,” it said.

“My grandchildren sent it to me,” she said.  “My husband used to give me flowers and presents.  He never forgot.”  She sighed.  “But he’s been gone now seven years.”

So she was alone, just like him.  He licked his lips.  “I…once sent you a Valentine’s Day card.”

Yes, and you liked me once, too.  Liked me a lot.  Then you met the boy who became your husband and forgot all about me.

Evvie was looking at him.  “Excuse me, I don’t mean to stare.  It’s just my memory isn’t so good anymore and I forget things.  What did you say your name is?”

He held out his hand, his heart pounding.  “Andrew Delane.”

She raised her own and placed it trembling in his.  Parkinson’s perhaps.

She gazed at him, and for a moment sixty years passed away, and he could almost believe she was the girl who had briefly liked him.

“You most certainly may, Eveline.”  For the first time, he noticed other cards on the table as well as envelopes.  “What are those?”

“These?  Just some Valentine cards I’ve meant to fill out and mail.”  A flutter of embarrassment.  “I’m a bit late.”


I guess we both are.  He smiled and moved his chair closer.  “Tell you what.  Suppose I help you a little.”