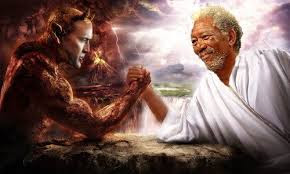 A funny thing happened the other day. I was navigating Facebook as I often do, and I noticed that Morgan Freeman had just died. I was both surprised and saddened by this news. I always liked Morgan Freeman. He was a good actor, and when he spoke, so did God if you know what I mean. Now a car accident had claimed his life.*

It was a shock but I continued on, only to see the next day that Brad Pitt had also bit the dust. Maybe it was contagious.

Fake news has always been around, but lately it’s become more common. In another “news” account, Morgan Freeman is not only dead, he’s been cloned. Wait, hold the presses, there’s even more. Morgan Freeman just married his step-granddaughter!

As the site Politifact states, "Fake news is content that is manipulated to look like a real journalistic report, but it's not. It's completely made up. And the headlines are designed to go viral." Often, it's hard at least initially to tell the real from the fake, especially if we're not the kind to question or do a little digging. If we're "informed" that Hillary Clinton is running a child sex ring out of a pizza shop, we may believe it, especially if it fits our political bias or beliefs or is presented in a plausible fashion. Do "Democrats want to impose Islamic law in Florida"? Absolutely! On the other side, we have BuzzFeed's recent release of allegations concerning President-Elect Trump's ties with Russia and his "perverted sexual acts." It never seems to stop.

The motivation behind false reporting and manufactured stories can be almost anything. It can range from a political or social agenda to a simple desire to have fun and get a rise out of people. Or it can be to make money. Whatever the case, it is important for Us, the People, to be skeptical and to look before we leap into acceptance.  Credulity can be costly, whether to ourselves or others. Sometimes the truth can actually be hidden or difficult to see, or even ugly and unpleasant. Just ask anyone who has been unjustly sentenced to prison.

As I see it, there are two main reasons why there has recently been an epidemic of fake news.

1. Social media and the internet.  Facebook, to mention just one platform, often has sublime and beautiful posts such as lovely photographs of nature and animals of different species living in mutual harmony and support. Unfortunately, it also offers a lot that is ugly and obscene, as well as irresistible to the gullible. Above all, anyone who can log on can often get away with doing anything they want, things which they wouldn’t dare do in public. Faceless trolls and liars disseminate their mischief with impunity. If someone reports them and the site takes them off, they soon crop up elsewhere. The internet in particular is hard to resist. We all know people who have taken countless selfies from all conceivable angles. Why? Because they want friends and folks to react positively. And so do the frauds and pranksters who post fake news.

2. We’ve lost respect for research, scholarship, and critical thinking. This is at least partly related to #1. Before I retired as an English professor, I noticed that more and more of my students’ research papers were plagiarized from online sources. These articles were so quick and easy to find that some students didn’t even bother to go to the library. Why spend so much time and effort trudging all that way to dig through the stacks? Instead, they sat on their butts and cut and pasted whole sections of articles directly into their papers. Easy-peasy! I’m afraid that this casual, lazy attitude toward one’s sources has contributed to fake news. Sometimes, indeed, the offenders may even have difficulty distinguishing truth from falsehood. In the end, the truth is what they think it is.

Perhaps you can think of other factors that contribute to fake news. The important thing is to remain skeptical and to be on guard for it. Otherwise we run the risk of being seduced by falsehood and paying a terrible price.